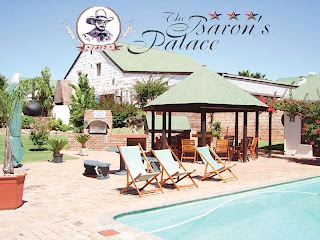 Stay at The Barons Palace Hotel in Oudtshoorn

The Barons Palace Hotel in Oudtshoorn reveals to her guests an era of affluence and opulence. The Hotel was built at the turn of the century by a wealthy Ostrich Baron. Lush drapes, high ceilings, ornate fireplaces and original ostrich plume showcases recreate an era of gracious elegance.

Baron's Palace comprises of 31 en-suite apartments, each of which is equipped with a telephone and colour TV. 24 of the air conditioned rooms open onto the swimming pool.
Other facilities include an a la-carte restaurant, a Bistro and a bar.

Getting married, planning a wedding in Oudtshoorn?

The hotel is ideally equipped to host weddings and other special functions.

Conferences at Barons Place are catered for in two separate venues.

For contact details and more information on the Barons Hotel in Oudtshoorn click here
Posted by Wilma at 2:29 PM

The lalakoitourism.blogspot forms part of the Lalakoi Publishing Network. Lalakoi was established in May 2000 and our main aim was to provide the area with an affordable marketing platform for all tourism related businesses. Over the past years Lalakoi managed to establish itself as one of the major tourism marketing companies in the Garden Route, Little Karoo and Route 62. Lalakoi concentrates in bringing their customers to the internet. Through our publishing network the Lalakoi customers can be assured of high Google ranking and thus visibility on the internet which results in more internet enquiries. You will find a articles on a selection of tourism as well as general businesses in the Garden Route, Klein Karoo and Route 62 on our sites.